MEIKO image equipment department handles equipments such as video wall processors, matrix switchers and peripheral devices such as equalizer and extender.
Since its foundation, we have been developing and selling video equipment. We had developed the world’s first video enlarging device and they were introduced into many facilities as part of the multi vision system.
In recent years we have been developing and selling video wall controllers, digital matrix switchers with built-in video transmission devices, and products related to IP transmission.
In monitoring facility where reliability is regarded as important, a large number of our products have been introduced, which proves its quality. They have been adopted in domestic as well as abroad.

We will continue to contribute to society with MEIKO Group’s corporate philosophy “Contributing to society by providing the highest values and services for customers”, “Challenge to the highest”, “Enhance the value of MEIKO Group and make happiness to employees and society”.

MVC series is an all-in-one video wall controller equipped with all functions such as multi-window processor, matrix switcher, scan converter, controller and so on.

MVC-Series can display input sources in real time on video wall screen and they can be arranged with free position and size.
In addition to the enlarged display that spans multiple displays, you can display multiple images on one screen or overlay the images.

It is possible to display in high definition with dot-by-dot on the video wall, by installing Windows applications such as maps on the main body.

By displaying the cursor on the output screen, you can operate the input source directly (enlarge / reduce / move) or change the display pattern by calling the registered one.

Control software suitable for the application 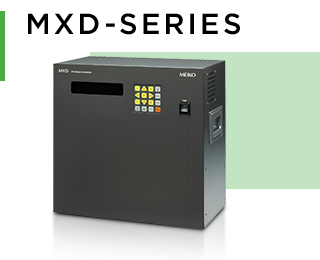 You can choose the configuration suitable for your system.
We have several types of boards such as HDMI board, HDBase-T board, analog audio de- embed board.

The HDMI board has an equalizer on each input, and outputs a video with no deterioration even with a long cable.